“No problem can be solved from the same consciousness that created it.  We need to learn to see the world anew.”
Albert Einstein

Peace and Sustainability is the Number One issue of our time and it is a critical moment for the future of humanity. It is time to SPEAK UP and be the change we wish to see.

I am seeking innovative and inspiring project partners to support and collaborate to establish the SPEAK UP Award for the benefit of children across the world.  I am searching for a principled leader to get behind this initiative.

It is proposed that an International Sustainability & Peace Encouragement Award for Kids to Unite People (International SPEAK UP Award) be established.  The International SPEAK UP Award will have as its call to action ‘to be the change you wish to see in the world’ (Gandhi). This is a powerful message that leads by example and encourages ethical conduct and real-world community service. This is an important message for children and world citizens around the World. The purpose of the International SPEAK UP Award is to empower the next generation to lead the collective visions and actions for peace between people and with natural systems. The Award empowers children by rewarding and acknowledging their ideas, creativity and capabilities in peace building and ecological sustainability in their local communities. The Intern

Significantly, the international organisation chosen will be in concert with a growing worldwide movement empowering a real future for children inspired by the theme ‘to be the change you wish to see in the world’ (Gandhi) and inspiring world citizens towards self-responsibility, peace as personal change and to action peace and sustainability in their world.

It is proposed that the International SPEAK UP Award be promoted worldwide to schools and submissions collected at the local level. Susan Carew, a Peace Scholar, will travel to nominated countries as Peacefull the World Peace Sustainability Clown.

As a Peace Ambassador, Peacefull (Fool) will promote the International SPEAK UP Award to schools, communities and organisations. Peacefull will visit schools and inspire the children about:

Susan Carew is a trained market analyst and will conduct market research with school children. The research is entitled Children’s 2050 Visions. The research will provide an opportunity for children to voice their ideas on what peace and sustainability means to them and the world they envisage. Moreover, it will provide important global data and provide alternative visions for the future.

A documentary film will be produced about the International SPEAK UP Award. The film will trace the journey, highlighting the highs and lows and the many hands linking together in selfless ways.  Interviews will be conducted with principals, teachers, children, parents, communities and interesting individuals met along the way revealing their impressions and what they are learning about peace and sustainability. The documentary film enables the voice of children to be heard, promoting how children envisage peace and sustainability and how children express how they can make a difference in harmony with Gandhi’s vision ‘to be the change you wish to see in the world’.  Children will realise that when they change this changes their world locally and globally.

It is proposed that a Patron be nominated, this person will be an outstanding individual demonstrating a lifelong commitment to youth, peace and humanity.  This person will inspire others with the vision of empowering young people to become involved in peace building and sustainability projects across the world.  The recipients will be children and youth of outstanding values and merit demonstrating a determination to be the change they wish to see in their local communities. Thus thinking globally and acting locally.

The author of the International SPEAK UP Award is Susan Carew, a Peace Scholar based in Australia. 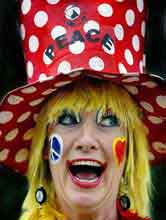 In 2010, I travelled the world as a World Peace Clown to 20 countries in 6 months. I self funded the project to go to schools, hospitals and clowned on the streets to bring peace to life as love and joy and to test how the clown was received cross-culturally.

What I require is like minded empowered people who can commit to an idea and follow through. I have already shown through my work that I have the capacity to carry this project out. If you are inspired about the future and an ethical person/organisation then please connect.

We are seeking project partners and sponsors. If you want to make a difference contact Peacefull

The International Peace and Sustainability Award will inspire and encourage children …

‘To be the Change You Wish to See in the World” (Gandhi).

This proposal has been circulated for feedback, critical appraisal and grounding from Rotarians, peace and conflict resolutions experts, scientists, ministers, civil libertarians, nuclear activists, community development advocates, educators and think tanks. The author of this proposal would like to warmly thank all contributors for sharing their advice and feedback. Initial responses to this proposal, as follows:

Dear Susan, dear Antonio – very impressive, totally original, never seen anything like it before. Forward it to Olivier Urbain for Arts and Peace – please — all the best johan in California
Professor Johan Galtung

Dear Susan, I really admire your noble effort to educate and inspire children, particularly to understand peaceful philosophy and also the education that you have given yourself in this area.
Dr. Helen Caldicott Author, Public educator about the medical hazards of the nuclear age

Dear Susan, Kris here – I have read you proposal and I think it is admirable and a great initiative.
Dr. Kris Klugman, Civil Liberties Australia

G’day Susan, A brilliant concept! Congratulations. I think the concept is exciting and that Peacefull is the absolutely perfect person to be the messenger. I greatly admire your commitment to world peace, and support this proposal with my good wishes, joyful thoughts and prayers

Dear Susan, the wonderful aspect about you is that you are still pursuing your dreaming and I think that is terrific. I really hope you succeed in this endeavour.

On January 12, 2001, 100 of the World’s Nobel Peace Laureates published a ‘Dire Warning For Planet Earth’, reinforcing the idea that it is time to change the way we think:

“The most profound danger to world peace in the coming years will stem not from the irrational acts of states or individuals but from the legitimate demands of the world’s dispossessed… It is time to turn our backs on the unilateral search for security, in which we seek to shelter behind walls.   Instead, we must persist in the quest for united action to counter both global warming and a weaponised world.  To survive in the world we have transformed, we must learn to think in a new way. As never before, the future of each depends on the good of all.”

Mahatma Gandhi considered himself a practical idealist.  As leader and founder of the nonviolence movement in India, his work stands as a testimony for alternatives to violence and war.  The success and popularity of his approach was evident by the global response to his actions of leading his people in a nonviolent struggle for their independence.  Gandhi believed the future is in the hands of children, he stated:

“If we are to reach real peace in this world and if we are to carry on a real war against war, we have to begin with the children.”

As an inter-generational concept, sustainability requires present generations to nurture the world’s social, economic and ecological well-being, and to enable next generations to do the same. The transfer of critical knowledge to today’s young people is vital, yet its realization is threatened by crises in resource-stressed regions and by diseases threatening to obliterate whole generations. At present, youth under the age of 25 comprise over 50 per cent of the world’s population. This scenario calls for significantly more attention to be paid to preparing youth for the challenges ahead. Many solutions have been proposed to bring young people to the forefront of ecological sustainability which in truth is about balance.  Today, in relation to COVID-19 young people have become marginalized in the political sphere, left with the impression that their input is not valued.

The United Nations has been unable to create a voice for the children of the world. It is evident the exploitation of children by govenments, corporations and welfare agencies render them more powerless and in need of a voice to create a future worthy of them.  The quote below is from children back in 8 May 2002 addressing the UN.  Two delegates representing the Children’s forum stated the following:

Child delegates: Ms Gabriela Azurduy Arrieta (Bolivia) and Ms Audrey Chenynut (Monaco)
How we treat children reflects who we all are.  They are not objects, exploitable commodities but living breathing people who are aware something is very wrong but cannot give voice to their feelings as despite popular narratives they are seen but not truly heard.  Until they are seen and heard we will not be able to move forward as a civil and humane global community.  The future of humanity will depend on the ecological balance centreing on raising and nurturing children in balance as nature intended.

Some statistics are provided below (2015):

The 1959 Universal Declaration of Human Rights sets a universal standard on the rights of children.    The declaration highlights the need for children to develop individual abilities and learn to be useful members of society, protected from harm and exploitation.  Moreover, the responsibility of parents and others is to provide conditions that will foster the development of children, enhance confidence and self esteem enabling them to develop to maximum potential.